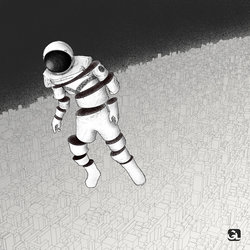 Floating through gorgeous melancholy, Kid Fiction's latest release is a beautifully moody think piece on the monotony of modern life. A minimalist production that sees his voice and lyrics come to the fore, stripping back the layers and complexity that defined his debut.

The track (originally a 30 second interlude culled from his previous EP) grew into a full song during several weeks spent with a family member in hospital, “It's about the world of clean, polite and inoffensive things we use to hide the real emotion of our lives” says Fiction.

The single comes on the back of a breakout year for Kid Fiction, with his debut self-titled EP receiving acclaim from international tastemakers such as XLR8R, Indie Shuffle as well as radio ads from KCSS in California.

RNGLDR Magazine described it as "unlike anything we've ever heard... Kid Fiction has become the sole designer of his own unreplicated sound".

The release set him off on his first tour of Europe, with dates in UK, Germany, Switzerland and Eastern Europe, including stops at Ministry Of Sound in London.

Not one for staying still he's linked up with Danish pop savants GL Music. Bigger and better things in 2019.