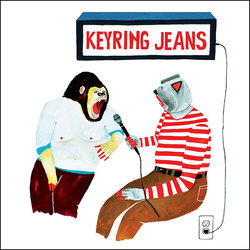 At the beginning of 2015, Keyring Jeans was a recording project for which Sydney based singer/guitarist Steve Coull had written a handful of songs. In an inspired “why not?” moment, a plane ticket was booked to Arlington, Virginia in the USA where he would record an EP at Inner Ear Studios with Don Zientara (Fugazi, Minor Threat, Bad Brains). The result became a collection of fuzzy numbers, a 5 track EP titled ‘Silence’.

Joining to form what is an intense alternative rock trio, are a powerhouse rhythm section, drummer Oscar Wuts and bass player Oscar Selden. After a month or two rehearsing behind closed doors they kicked off their live incarnation with a string of 6 shows in 6 days, some of which were as opening band for the legendary You Am I.


Sideline Rain begins as a traditional alternative song, with a fun melody, strong guitar, and insightful lyrics. The instrumental solo in the middle of the song slows it down without losing the energy, while also preparing you up for a strong finish.

Other tracks by Keyring Jeans: Headlow
%