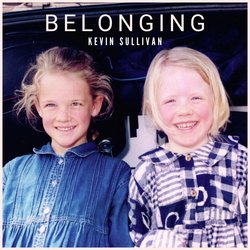 At its heart, Belonging is about the power of music to really nurture and support people dealing with sadness, separation and overcoming the moments in life where we feel we have no control. The chorus says it all, "Singing songs of love was your way, it helped us get through every day." Though the song reflects on sadder times, it carries a positive message, with both of Kevin’s daughters coming to live with him later in life.

‘The single artwork is actually taken by me during those earlier years,’ explains Kevin a former Forensic Crime Scene Examiner with the New South Wales Police, Kevin spent a lot of time on call, often when he was scheduled to be with his daughters. In the single artwork, his daughters, Emily and Alex, are sitting in the back of the Forensic Crime Scene station wagon. ‘The photo brings back both happy and sad memories for me. I remember never getting used to not having my children living with me.’

Belonging is the final track from the same-titled album, in what has already proved to be a sterling year for the south coast based artist.


Singer-songwriter Kevin Sullivan returns with his fourth single, Belonging – the final track from the same-titled Album, Belonging. Belonging tells the story of how Kevin and his two eldest daughters, used music and songs to cope, following the separation and break down of his first marriage.