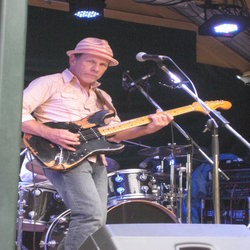 If you ask Kelly how long he’s been writing songs he will say in his self-deprecating way “some people would say too bloody long!” In between tinkering in the back of a motorcycle workshop (he’s a mechanical engineer); Kelly has kept on penning songs of love gained, love lost, and the mysterious and sometimes cruel irony of life's journey.

He has just taken delivery of his first solo songwriter CD, the aptly named One of These Days. The album was engineered by Rob Mackay at Pacific International Studio, Hervey Bay. Kelly’s reputation in the Australian alt country scene is such that he was able to call on Kevin Bennett to add vocals, acoustic guitar and what KB terms “scruffy telecaster.”


Some of Kelly’s former band mates including Tom Richter (guitar), Max Sportelli (percussion) and Ashley Wolffe contributed to the album, as did Gary Kohler and Rob Mackay (The Bobkatz). Canadian vocalist Carolyn Lovely and Brisbane guitarist Mick Thatcher also joined the party. The CD has been very well received and is enjoying strong radio air play on 98.9FM Brisbane and several ABC stations including as the feature album on ABC’s Felicity Urquart show.


The song Boxes is a fairly true view of life’s ups and downs. It stems from losing family members and more than a fair share of friends in recent times; it got me thinking that if filling boxes with past possessions becomes an Olympic sport I’lI will do very well!