Kelly Brouhaha - As Long As There's A Smile 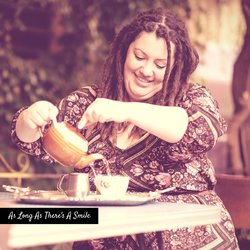 It’s been almost 3 years since her last release, having left her mortgage & marriage in an effort to find happiness and pursue her love for music – it’s taken Kel some time to find her way through the depths of divorce, debt and depression , something the “Smile it’s Free” singer had certainly not expected.

Shortly after leaving the 9-5 behind, the financial pressure of a creative lifestyle took hold and it was easier to avoid the debt that the new record had created than deal with it. She says “People don’t talk about mental illness, as a musician it’s almost kind of romanticized a little – like we have to be struggling to make good art, but there’s nothing romantic about it. I had this voice inside my head while I would play convincing me there was no one at the gig because I was just a really terrible person, not even that the music bad – but that I was bad.

It made even just getting to a gig hard, let along putting yourself on a stage in-front of people attempting to fool them that you’re doing great while you sing songs about smiling”.


The fun and uplifting folk track, As Long As There Is A Smile, is about choosing optimism - That thing of when you go through your s**t and you can choose the suffering that goes with it or you can choose to find the positive in it. It's all positive!