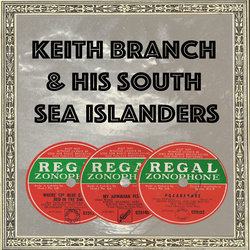 By the time Keith Branch stepped into the Columbia recording studios in Sydney on 20th June 1947, the popularity of Hawaiian music was starting its slow and steady decline. The six recordings made by Branch sit at an interesting point in the development of the genre; then at the tail-end of its influence as a form of mainstream popular music.

The combination of Branch’s sensitive steel playing, sparse accompaniment (guitar, uke and bass), along with crooner-style vocalising, stand in contrast to later shifts in the electric steel guitar sound and elaborate and instrumental orchestral arrangements featured in later recordings of Hawaiian music.

The songs themselves reflect a greater awareness in Australia’s position and connection to the wider Pacific, with references to Hawaiian culture but also Tongan and Maori. Although they are ostensibly pop songs, the themes mark a trend towards more local and topical songwriting, and a broader sense of “Australianness”.

Although Branch’s musical legacy is brief, the recordings made under his name were kept in the EMI catalogue right until the mid-1950s, just before 78s were phased out altogether. This compilation is dedicated to the overlooked recordings of Hawaiian music made in Australia during the 78rpm era.