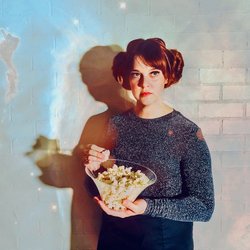 Engaging, emotional and witty, Kay is an indie-folk singer-songwriter with a remarkably agile, engaging, honest, soul-bearing voice and a wry, dry-ice sense of humour. With a live performance style that is much like being invited into her lounge room, her songs are truly stories set to melody, by turns relatable, humorous and heartbreaking.

The co-ordination that never showed up for Kay on any sort of sporting field has made itself known in a marriage of acoustic guitar, voice and lyrics that are practiced in the art of observation. Her songs highlight the commonalities between human beings, pulling at them like heartstrings.

After releasing the original Christmas single 'Giftcard' in December 2018, Kay toured the summer festival circuit in Australia, including stand out shows at the Illawarra Folk festival and Cygnett Folk Festival, performing some of her back catalogue and previewing songs from her upcoming release due mid 2019. After supporting the likes of William Crighton, Caiti Baker, Shaun Kirk, Hollie Col, The Northern Folk and Boat Keeper, Kay is looking forward to heading out on her own headline tour on the back of this new release.


A song about dating someone who really likes Star Wars, May The Fourth is an anthem written by Kay Proudlove for those who are still trying to work out what order the episodes go in. Jangly guitars, a gliding vocal and clever, pop-cultured lyrics deliver a witty and relatable love song for this galaxy and those beyond.