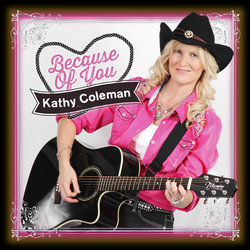 Kathy Coleman has been playing guitar & singing country music for many years & discovered back in 2006 at a songwriting workshop that she also had a very strong talent in the songwriting field. Since this time, Kathy has written hundreds of songs, recorded 3 self-penned independent country albums, the last 2 albums recorded in Nashville, she has won numerous Songwriting & Music Awards along with multiple Finalist placings' in Songwriting awards for the last 6 years. Her most successful song to date was titled "Dunedoo Station" winning the "Australian Category" of the 2012 ASA National Songwriting Awards, along with a 2nd placing in the Ballad Category the same year for "He Still Remembers". Dunedoo Station also Won best Australiana Song at the 2011 Canberra Country Music Songwriting Awards, both of these tracks are on Kathy's 2nd album titled "Hot & Bothered". Kathy has recently released album number three titled "Because of You" which contains 12 beautiful country tracks of which one of them titled "They Call 'em Coopers" won 3 Songwriting Awards at the 2012 Canberra Country Music Festival. Kathy plays regular gigs throughout NSW & continues to promote her music at every opportunity.


The song is a true historical account of the Coopers Animal Health Company & how one man’s dream (William) back in 1843 became a reality & has continued on through 7 generations of Australian farmers. Coopers are dedicated to protecting & improving the health of Australian Livestock.

Other tracks by Kathy Coleman: Looking Back
%