Kate Lush - Pack It Up 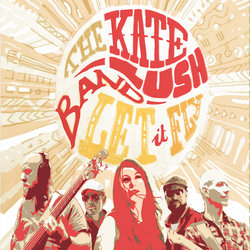 Kate Lush is taking off into a whole new stratosphere, right now. The Aust Blues Chain Award winner is in creative overdrive, firing out an #1 Album last year & rocking festival stages & venues all over Australia. Here she is again with her unmistakable soulful grit, that red hot band & some great songwriting. She is gritty, soulful & straight from the heart. This is the 4th album from the Kate Lush Band who just entered the Australian Blues & Roots chart this week at #3 (2 wks after launching). The album is already charting on most downloaded U.S. Blues AirPlay Direct & placed as Finalist in the U.S. IAMA Songwriting Competition & U.S. ISC Semi-Finalist (with winners TBA).
A full year in the making, it is the most gripping, classy blues album she has produced to date. Her albums always take you on a journey, in the way that albums used to move you in the 70’s, & this is no exception.


This is a fantastic upbeat cover of a Freddy King song called Pack It Up. Originally from his Burglar album, when Kate heard it she was inspired to do her own version.