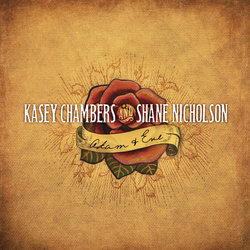 It’s been almost five years since Kasey Chambers and Shane Nicholson released the #1 platinum album Rattlin’ Bones in 2008. It was the first time the pair joined forces as co-writers, and it ultimately won them a host of ARIA, APRA and Golden Guitar Awards. Now, tempting fate and again testing the marriage they return with their second collaborative album, Wreck & Ruin.
They began writing Wreck & Ruin in March this year. The couple took short breaks to a small cabin at the foothills of the Hunter Valley to switch off from daily routines and focus on writing.
Ruled by a busy home life, established music careers, hectic tour schedules and Nicholson’s work as a producer it was a perfect way for them to disassociate from the pressures of every day and focus on their artistic needs.
Wreck & Ruin was recorded in eight days at Foggy Mountain, and the 13-track album captures each of the various elements of Kasey and Shane’s love for music – from roots to gospel, bluegrass to folk, but always country to the core. “We have a passion for music, particularly country music, that is in many ways ‘traditional’ but not always ‘conventional’.”


The song Wreck & Ruin is us saying we are here doing it again,” says Nicholson of their decision to record another album. “We’re going to step back on this carousel and once again exploit our heartaches and troubles. It’s about digging through your own baggage for a living.

Other tracks by Kasey Chambers and Shane Nicholson: Adam & Eve  -  A Quiet Life
%