Karin Page - Wherever You Are 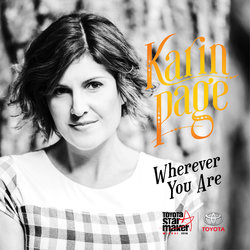 Rootsy alt-country with a dash of folk is how most would describe the style of Karin Page.

This gifted singer-songwriter from Perth moved to Byron Bay in April 2016 with her musical and life partner Adam Nyeholt. Prior to this they’d spent 18 months touring Australia, playing music wherever the road led them.

In January 2016 she took out the Toyota Star Maker Competition in Tamworth and as part of her prize package Karin has recorded three singles, all with accompanying film clips – along with appearances at various festivals, including a spot on the GlobaLive showcase in Nashville, TN.

She has currently released 2 singles this year, with a third one on its way that is set to be released at the 2017 Tamworth Country Music Festival


'Wherever You Are' weaves its way through the feelings and emotions that are experienced when you are in one particular place, but at the same time longing to be elsewhere. It has a moody verse with a catchy chorus that will have you singing along in no time.