Karate Boogaloo - Doing It To Death 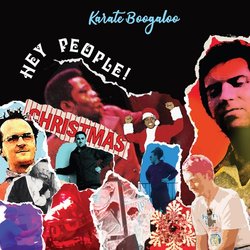 KB consistently sit in their own lane – their combination of raw musicianship and sheer time on the clock playing together in the studio and on stage gives them a glowing presence rarely seen. Making records, they follow their own rules; recording and mixing on tape with no plugins and no edits, releasing exclusively in mono. It’s not about anachronism, it’s about the KB manifesto: a chosen set of limitations forcing a specific outcome, an outcome best appreciated through their “KB’s Mixtape” series of LPs.

2018’s KB’s Mixtape No. 1, a self-produced and released collection of interpretations of hip hop samples done in Karate Boogaloo’s immediately recognisable wonky style is fast becoming a cult classic amongst Melbourne’s diggers, selling out in local record stores through word of mouth alone. In 2019, KB’s Mixtape No. 2 is coming out in September through Hopestreet Recordings.


Happy Holidays and Seasons Greetings from KB. We landed on ‘Doing It To Death’ pretty naturally. It got thrown up with a heap of other stompers and in retrospect we chose this because it is emblematic of The JB’s beautifully considered simplicity, and James Brown at almost his most outrageous, evidenced in the key change halfway through.