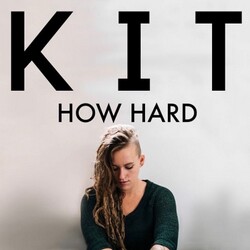 KIT returns with her second single, “How Hard”, following the success of her last. “Goodbye”, released in June 2015, was spun on triple j Good Nights, 2015 with Richard Kingsmill and Home & Hosed with Dom Alessio. It featured for 2 weeks in the AMRAP charts, reaching number 3 overall, and held the number 1 spot on triple j unearthed for 3 weeks.

A relentless touring artist with her previous band The Blue Ruins, playing festivals like The National Blues Fest, Byron Bay Blues, and The Folk Alliance Conference in Memphis, KIT is now eager for a run of shows to support her first two singles as a solo artist. Look for upcoming shows and the release of a music video for “How Hard” produced by Killafish Productions in early 2016.


“How Hard” being released this February via Marshmallow Pavement Records is a R&B-infused, pulsing track, characterised by the undeniable strength of Kate Watt’s vocals. Finding inspiration to create the song through retelling the experiences of those closest to her, Kate found catharsis of her own.