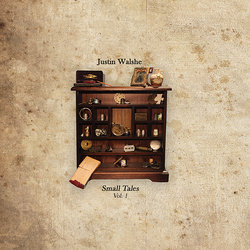 Justin Walshe and his band The Folk Machine have amassed a reputation for historical, epic, storytelling folk rock with recent performances of their unfinished opus, The Epic Tale of Burke & Wills and their acclaimed 2010 release Walking To China.

But while they embarked upon these ambitious adventures, a humble and mischievous collection of songs sprouted in their wake from the more idiosyncratic corners of Walshe’s creative backyard. Songs such as Little Bird (a brief ditty about a bird that flew into a window) and Forever's Just Another Name (a metaphorical dance through time to a backdrop of homemade percussion and kazoos!) and even a sleepy cover of an Aussie rock classic offer a light footed departure from their heavy handed historical works still prevalent in the dark bluegrass of Willshire.

Recorded mostly on a Sunday afternoon in his Fremantle lounge room, the 5 tracks on Small Tales Vol. 1 are minimally adorned with acoustic guitar, mandolin, homemade percussion and Rhyll Wilson’s close harmonies to give the songs just enough to spark the mood and get the tale smoking.

Small Tales Vol. 1 is a totally independent release available at live shows and online at JustinWalshe.bandcamp.com.


A metaphorical dance through time to a backdrop of homemade percussion and kazoos.