Junor x Z. LEWIS - Nothing To Me - Internet Download 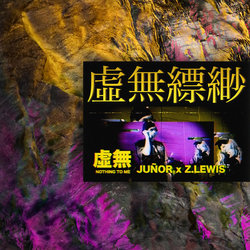 Since bursting on to the scene in 2015 with a debut project that reached Top 10 on the iTunes charts, Juñor has quickly solidified his position as a pioneer of the global generation of Australian hip-hop. Possessing a resume longer than his iconic dreadlocks, Juñor is regarded as one of the hardest workers in the country – actively operating as a rapper, DJ, producer, engineer, songwriter, media identity and label executive.

2017 was a breakout year for the Melbourne talent, his single ‘Top Flight’ – an international collaboration with LA’s Mann and Chicago producer Nate Fox (Chance The Rapper) was acclaimed across the music landscape, finding itself named alongside Travis Scott & Selena Gomez in Apple Music’s “Best Of The Week” as well as getting spins on Triple J, FBI Radio and Triple J Unearthed.

Born in East-London, fire emcee Z. LEWIS has stormed onto the scene in recent times commanding respect with each verse as he has fast become recognised by platforms including Triple J as one of the premiere spitters in the country. More than just a mere rapper, look for sonic diversity from the rising star sure quickly capture fans with his charisma and talent.


Following an extended hiatus, Juñor returns with a face-melting statement record in "Nothing To Me". Teaming up with London born spitter Z. LEWIS and Sydney producer I-Digress, the three have cooked an undeniable banger destined to dominate the urban underground. Combining wild cadences, commanding lyricism and frenetic production - they speak on achievements, frustrations, and hint at pending cultural domination.