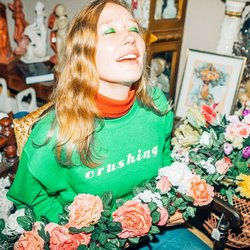 With ‘Head Alone’ and ‘Body’ marking the poignant return of Julia Jacklin, Liberation Records are thrilled to reveal Julia’s hugely anticipated second album titled Crushing will be released on Friday 22 February 2019 - Polyvinyl for the US and Transgressive for the UK/ Europe.
Jacklin was awarded ‘Next Big Thing’ at the FBi SMAC Awards, Best Independent Blues and Roots album at the AIR Awards and was nominated for two ARIA Awards and Album of the Year at the J Awards in 2017.
Having just finalised a huge run of US tour dates across September and October supporting First Aid Kit, Julia returned to home soil for a quick break before heading to the UK this month for sold out headline dates across London, Manchester and Glasgow.