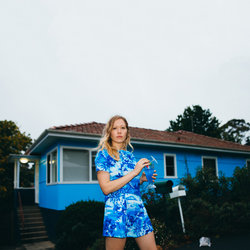 Julia recently played a sold-out homecoming tour (that saw her perform to over 1200 people at The Metro Theatre!) and will perform at Splendour In The Grass in July.

Julia’s hectic international touring schedule continues, with over 30 dates currently announced for the year ahead – most throughout the US, UK and Europe. She has relocated temporarily to Barcelona.

Her debut album Don’t Let The Kids Win has been a critic’s favorite, featuring on numerous end of year lists in 2016. Jacklin has also enjoyed nominations for APRA Australian Song of the Year, Album of the Year at the Triple J Awards and featured on NPR’s Tiny Desk Series.


‘Eastwick’ is a captivating, slow building track, inspired by a night in front of the TV watching Dancing With The Stars. ‘Eastwick’ was recorded in New Zealand with Ben Edwards, with whom Julia recorded Don’t Let The Kids Win.