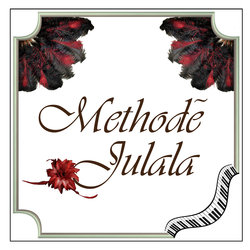 Julala was born in Sydney, Australia on December 13th 1981 and currently works as a piano and Japanese language teacher. In late 2010 she came to realise her ability to compose a wide range of piano music thanks to a small company’s request for a piece of music to help promote their “Viewpoint” card game and YouTube video. Ever since then, Julala has created over 15 pieces, which will be included on her soon-to-be-released debut album titled “Methodé Julala”.
Julala has already been gaining some attention towards her music receiving a nomination for the APRA/AMCOS Professional Development Awards in January 2011 under the genre of Film & TV. She has also built a fan-base of over 400 admirers from around the globe through her artist website and internet radio profile. These small successes have encouraged Julala to record and master her first album so she can share her piano sound with the wider Australian community and build a reputation as a composer of imaginative and dreamy melodies.


This piece is described as being reflective and beautiful. The imagination can easily picture the Gion area of Kyoto, Japan where Maiko and Geisha gracefully rush around their traditionally preserved town evening after evening, running from job to job where they entertain high-paying customers in order to make a living.