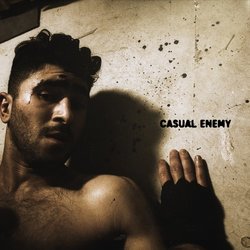 Forming in 2016, Joy in Motion in its current form is Jake Solway (vocals), Carly Sinn (drums), Joshua Wessling (bass) and Jesse Simo-swer (guitar). The bands debut EP, 'Falling Out' dropped in 2017 and paved the way for an East Coast tour and support slots for the likes of Young Lions, Real Friends (US), Tonight Alive, Slaves (US), Never Shout Never (US), The Dangerous Summer (US) and The Red Jumpsuit Apparatus (US) to name a few.

Building on the hype 'Falling Out' earned them, the four-piece released their single "Off By Heart" which put a darker, heavier spin on pop rock and contrasted with the happier, more upbeat feel of the EP. Late last year Joy In Motion were put to the test in a fan voted battle of the bands competition that would secure the winners a spot on the Good Things Festival line up in their hometown. Playing up against a few of Brisbane's most exciting emerging acts, Joy In Motion came in first place and celebrated their win atop the Good Things stage shortly after.


The band teamed up with ARIA nominated producer Stuart Stuart to produce, mix + master "Casual Enemy", introducing a fresh new sound + experimenting with a more polished and beat driven vibe. The single narrates the battle of chasing respect, fighting to be treated like a human being after being walked over, taken advantage of and treated like less.