Joshua Seymour - Nothing To Me Now 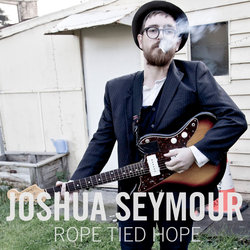 The debut L.P Rope Tied Hope, recorded in Argyle, Texas, see’s Seymour put his own Australian spin on Americana. Drawing from personal experiences, sometimes hilarious, often poignant fictional accounts, he brings an honesty and frankness to his songs. His distinctive, enigmatic vocal style and unique take on finger picking on both Guitar and Mandolin should see this burgeoning talent considered one of Australia’s most exciting songwriters.

Seymour is a traditionalist who has immersed himself in the old-timey standards of dust-bowl era American folk and blues recordings. His music has a compellingly plaintive quality that harks back to a bygone era of a classic older rural performer. Lucky Buck Records brought in Grammy award-winning engineer David Willingham and producer Robert Jason Vandygriff to embrace Seymour’s traditionalist style as well as see the songs to their full potential.

"There are touches of Bon Iver, Iron & Wine and occasionally the band Spain in his gothic-sounding songs ornamented with stately piano, pedal steel, handclaps and all manner of stringed instruments. An accomplished and impressive take on the haunting corners of Americana music." The Music (4 Stars)

Catch Seymour live throughout Victoria in September before he heads off to tour the USA.


Nothing To Me Now is a bitter sweet breakup song featuring hand claps and backing vocals.