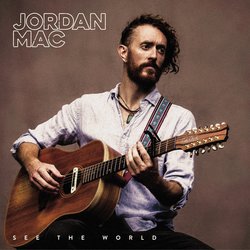 Australian Progressive Folk & Roots artist Jordan McRobbie has fast become known for his honest voice and virtuosic ability on the 12 and 6 stringed guitars while laying Middle-Eastern and Celtic infused riffs over electronic beats and latin percussion.

Over his career he’s released two studio-records, toured internationally and taken out multiple songwriting and performance awards including the West Australian Blues/Roots Song of the year for his track ‘High Tide’ that garnered the young artist airplay on local and national radio including Triple J.

After a mammoth couple of years, playing festivals such as Woodford Folk Festival and over 100 shows a year including opening for Neil Finn (Crowded House), Angus & Julia Stone, Fat Freddy’s Drop, Nahko & MFTP and touring with Mat mcHugh & The Beautiful Girls to name a few, McRobbie now has his sites set on Europe and North-America following the release of his forthcoming EP in 2019


See The World is an upbeat, twelve-string guitar driven ode to roots-music while bringing in edgier flavours of rock with a psychedelic breakdown in the middle.