Jook Joint Band - What's The Matter With The Mill 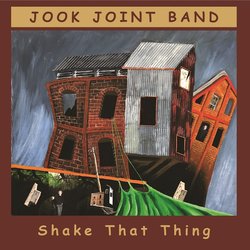 The album conveys the bands roots in the jug band, ragtime and country blues genres.
The twelve songs are fired by catchy vocals and solid rhythms in the style of the 1920’s and 30’s songsters and by modern day exponents such as Leon Redbone and Pokey Lafarge.
From the first song “Gotta Shake That Thing” which is full of double entendre and that will get any juke joint up dancing through to the humorous and somewhat whimsical last song “I Want To Be Seduced” you will be captivated and entertained.
It is an album you can dance to at home, jive to in the car or take along at any hootenanny.
Jook Joint Band is a jug band at heart and for the past ten years they have been wowing their audiences at regular gigs at bars and pubs in and around Perth.
They have performed at the Bridgetown Blues Festival, Fairbridge Music Festival, Boddington Music Festival and throughout WA at many other festivals.


A story about a town where the mill is the centre, the economic engine that provides jobs and puts food on the table. The mill done broke down, and the townsfolk are wondering what to do.

Other tracks by Jook Joint Band: Gotta Shake That Thing  -  TV and Leftovers
%