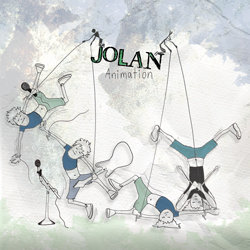 Songwriter, guitarist, pianist, vocalist and music producer Reese Szabo is at the core of Jolan – a 5 piece band that formed in early 2008 Reese grew up in Wollongong in a musical family with a father and brother who both played guitar and sang. A regular in the household was the music of the 70’s that blared from either the stereo in the lounge room or the acoustic guitars hanging around the house. America, Lobo, Harry Chapin, ELO, Brian Wilson and the Beach Boys, Bob Seeger, Smokie, Dire Straits, Don etc became the building blocks of Reese’s lyrical and compositional foundation.

Reese was a finalist in the 2012 APRA Development Awards for song writing, and works as a music producer and session guitarist in Sydney.

Recorded at Origami Studios and produced by Reese Szabo and Steven Manovski, Animation tackles subjects of life and death and religion, the loss of Reese’s, and the struggles of watching his girlfriend fight through cancer for the second time in her life. It’s easy to call the album sound piano based pop/rock but it may surprise you with its acoustic flavours and electronic sounds – not to mention the appearance of a string quartet.


“Falling Apart” tells the story of a brokenhearted woman struggling through loss, loneliness and memories, and how the friendship and strength of another will lift her to a warmer, better place.

Other tracks by Jolan: Animation  -  Footprints in the Sand
%