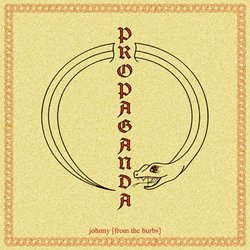 Set to release his third mixtape EP ‘Propaganda’ this Oct, Johhny [From the Burbs] has given us a taste with the release of the title track (out Sept 28).

'Propaganda’ as an EP is dark, but not negative – braggadocio & hopeful in the loudest way possible. In keeping with the EP’s title track - lyrical influences range from refugee rights to government distrust and the overall political agenda of propaganda being used as a political weapon.

Giving up his ‘day job’ as lead vocalist in a metal band, the hip-hop artist and producer did a U-turn and dropped his debut mixtape ‘Springtime Sorrows’ in 2017 as Johnny [From the Burbs]. The last 12 months has seen him rack up radio airplay across the country and build into packed out shows right across Western Sydney. With ‘Propaganda’ he’s ready to go next level.


Topical and self-explanatory ‘Propaganda’ takes a look at “the use of news as a political weapon, how people can be prejudiced by the government’s attempts at subliminally influencing our opinions on everything from the US Presidency to immigration.”