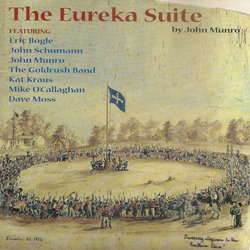 TWO OF AUSTRALIA’S LEADING VOICES CONTINUE THE REPUBLICAN CAUSE THROUGH SONG.

John Schumann and Eric Bogle are recognised for songs that dig deep into the Australian psyche to remind us of our own stories. The two internationally acclaimed songwriters have joined together in ‘The Eureka Suite’, a folk opera composed and produced by Eric Bogle’s long-time musical collaborator, John Munro. It is a timely reminder that the seeds of an Australian Republic were sown at the Eureka Stockade Rebellion 154 year’s ago, and, as Queen Elizabeth comes to the end of her long reign, the Republic draws closer.

John Munro and his ‘rebellious’ crew (which also includes The Goldrush Band, Kat Kraus, Mike O’Callaghan & Dave Moss) have delivered a stirring tribute in The Eureka Suite. It stirringly evokes the spirit of the times and reminds us that music can walk hand-in-hand with history.

It is with great sadness we note that John Munro passed away on the 10th May 2018, after a long illness. This release is a testament to his wonderful musical legacy and life.


John Schumann assumes the voice of Eureka’s central figure, Peter Lalor. The Victorian Public Record Archive reports: The disaffected miners held a meeting with the ‘Eureka oath’ being sworn by Lalor to the affirmation of his fellow demonstrators who swore to stand and fight to defend their rights and liberties.