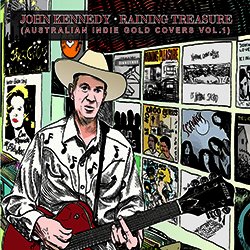 John Kennedy has compiled a list of classic indie songs and has recorded an album that takes you back to the legendary Trade Union Club and Strawberry Hills Hotel.

An enthusiastic young music journalist once described John Kennedy as a humble genius. Kennedy is neither a genius nor particularly humble. Kennedy started his music career in Brisbane in with his band JFK and the Cuban Crisis. The band moved to Sydney and after establishing itself on the indie music scene broke up leaving Kennedy to pursue a solo career.

Over the years Kennedy has shared stages with many of the acts covered on this new album. Band members have come from or gone on to the Triffids, Paul Kelly, the Go-Betweens and Ed Kuepper.

John Kennedy's 68 Comeback Special boasts a fine indie pedigree. Long-time drummer, Peter Timmerman was an original Love Gone Wrong member before moving on to the Widdershins. New bassist Phil Hall played with Sardine v, the Dropbears and the Lime Spiders. Guitarist Murray Cook started out in Finger Guns before going on to found the Wiggles. Together with Kennedy they have created versions of these Australian indie classics, reinterpreting some, expanding some and celebrating them all.


The first Go-Betweens release, which seems to have only grown in popularity over the years, is given the semi acoustic treatment by John and the boys. A very fine cover of this timeless tune that takes you right back to when it was all happening in Brisbane circa 1978.