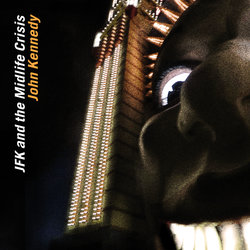 John Kennedy started his music career in Brisbane in the 1980’s with his band JFK and the Cuban Crisis.

John moved to Sydney with the JFK and the Cuban Crisis. After establishing itself on the indie music scene the band broke up leaving him free to follow a solo career with his band vehicle, John Kennedy’s Love Gone Wrong. Despite numerous indie hits, commercial crossover proved to be elusive leading to John’s decision to leave Australia. He spent the ‘90’s living and playing music in Berlin, Hong Kong and London before returning to Sydney in 2000.

The name of his first band, has been referenced to give the album its title: JFK and the Midlife Crisis. A concept album of sorts with songs relating to each other to form a loose narrative. The songs, some autobiographical and some fictional, tell the story of a deaf, dumb and bald middle aged musician looking back on a life lived to an independent music soundtrack. The narrator remembers with fondness and regret the life of an inner city musician negotiating the twists and turns of love, loss, marriage, divorce, family and friends.


The song details the journey of a balding middle aged musician looking back to the glory days of Sydney's indie music in the '80's. How far he's travelled, in lifestyle if not distance, from allnight benders in Kings Cross to the daily routine of school drop offs and grocery runs