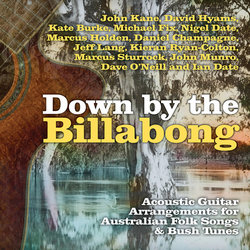 John Kane is featured on the compilation album, Down By The Billabong: Acoustic Guitar Arrangements for Australian Folk Songs & Bush Tunes.

John was an original member of the Flying Emus, playing guitar and mandolin.

The groups popularity led them to a range of radio and television appearances and by 1988 the group had picked up a prized ARIA Music Award for Best Country Album for their album This Town.