John Glase - Anywhere is Somewhere (with you) - Internet Download 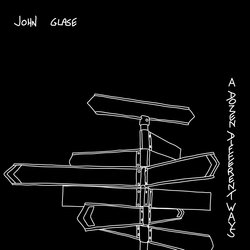 John's a Sydney boy, born in '56 (the week Elvis released Heartbreak Hotel). He ran away to join the rock and roll circus in the 70's and he's glad he did. Worked as stage manager for bands The Saints, Paul Kelly, Canned Heat, Dr Feelgood and many others throughout the 80's pub rock period. All this time John was writing and honing his craft as a songwriter (without letting too many people know).

By the mid 90's, the live music scene in Australia and was changing, so John decided to reinvent himself. Got his original song's together, headed into the studio and started to document what he'd written over the last 20 or so years. 2 solo albums, then using local session gunslingers, he recorded albums Baggage Call/The Broadway Mile/Driftwood Serenade and now his current release (produced by Emmy award winning producer Sean Carey at Church Street Studios in Camperdown) A Dozen Different Ways. Band included Beau Golden, Jy Perry Banks, Matt Druery, Peter Marcus Holden and the golden syrupy voices of Laura Stitt and Miranda Carey.

John writes and sings his unique style all based on true stories from a life spent musing, wandering, laughing and trying to understand.


This song was written for the beautiful girls I say hello to while I'm shopping and out and about along the high street at Ettalong Beach.

So a big hi to April and Elizabeth and Chantelle and Leanne and Cindy and, oh I could on and on.

I wanted to write a 50's type 2 minute radio song.


Other tracks by John Glase: Morgan County  -  That Jukebox
%