John Callaghan - Down & Out Cowboy 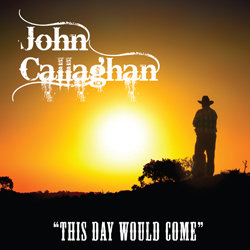 John Callaghan grew up in the rugged WA mining town of Kalgoorlie/Boulder, but now resides in South Australia. John is a singer/songwriter who is a very proud and parochial Aussie. John describes himself as a singing storyteller, who likes to draw the listener into the visualization of the songs he sings at his gigs.
John’s favourite saying is “Music is the elixir of the soul”, it enables people to forget for a while about their daily lives and be transported, through song, to another place and time.
The new album, “This Day would Come”, is a album of self penned song about family, people he has met some good country favourites, plus two covers. These covers are always requested at his gigs, so John decided to put them on his new album.
John sings at RSL clubs, lifestyle villages, clubs, prisons and churches, where his special brand of music and his songs about family, the Australian land and its people, reach out and touch the hearts of those who listen.
John has been fortunate to be a support act to Johnny Cash, Don Williams and many great Australian Country Music Singer/songwriters, and is available for a concert, call him.


This song is about two old Rodeo cowboys who are down on their luck, but still keep going, despite the odds. I have met many rodeo cowboys like this, that where the song sprang from.