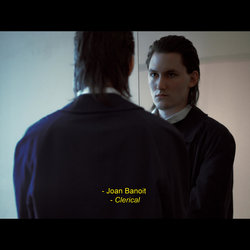 Bursting onto the scene several years ago with a series of Marrickville warehouse gigs, Joan Banoit signed to Sydney label Lazy Thinking in 2017. June of 2018 saw the release of the debut single and video ‘Bet Me’, earning spins and praise from the likes community radio tastemaker FBi,and Triple J, where presenter Marcus Whale described the track as ‘...sounding like the universe’.

The praise continued with Happy describing ‘Bet Me’ as “...one of the most awe-inspiring new sounds we’ve come across this year.” The single also saw Joan Banoit sell out a launch show at Chippendale Hotel later that month. ‘Bet Me’ was followed by Banoit’s sophomore single, ‘Mount Agony’ which was launched at a sold-out show at the Golden Age Cinema, co-headlined by Gussy.

2019 sees the fruits of Joan Banoit’s labour realised in the form of debut album ‘Clerical’, out Friday 14th June on Lazy Thinking Records.


'Clerical' is the title track from Joan Banoit's debut album. ‘Clerical’ is an album for those that believe contemporary musical, and in particular, electronic music, is most relevant when dealing with the new, the innovative and the dangerous.