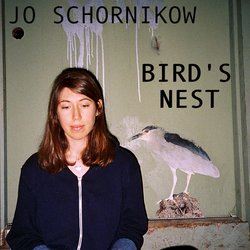 Described by the Scotsman as ‘Effervescent’, Schornikow's music consists of guitars strumming to the fibres of travelogues and anecdotes. It’s made in churches and bedrooms in Melbourne and New York. Described as a ‘Talented motherfucker’ - words from Megan Washington.

Rewind to 2008, Schornikow moved to NYC to join The Shivers. The band continue to build their cult following, helped in 2011 by steady US & UK touring, an appearance on BBC Radio 1 and an MTV ‘O’ award nomination (only to lose to Marilyn Manson for not showing enough ass). Jo also contributed 3 songs and appeared in the 2009 Joe Swanberg/Noah Baumbach (Squid & The Whale/Royal Tenenbaums) film 'Alexander The Last‘.

Her solo debut is called First Time, Long Time. In U.S. sports talk radio, it means 'first time caller, long time listener'; the phrase is used by a caller who wishes to enter into a discussion respectfully.


First single “Bird’s Nest” was written in London but recorded in a Melbourne church. The title of the single is apt to the story behind its creation; whilst on tour a friend got called out at a party for having hair that looked like a bird’s nest.