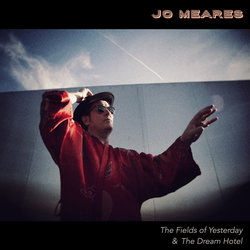 Jo Meares is a Sydney-based songwriter but he spends a large portion of his time in different locations around the globe, whether it’s Melbourne, France or Berlin, gathering life experiences and inspiration for his impressionistic and cinematic songs.

Following the release of his acclaimed 2018 album Back To The World, Meares has recorded two beautiful new songs ('The Fields Of Yesterday' and 'The Dream Hotel') that ponder grand themes with the kind of grace and poetry usually associated with songwriters such as Leonard Cohen, Nick Cave and Howe Gelb.

Meares used phone technology and a professional recording studio to again successfully capture the intimacy and widescreen drama of his trademark sound, where the listener feels like they’re being drawn into a finely detailed song, only to reveal an opulent world of thoughts and emotions.


The song is carried along on a dream-like current by acoustic guitar, sparse bass (Trent McKenzie) and evocative strings as Meares sings of loss, memories, immortality and the passage of time. It was a song that Meares wrote in one sitting until it was finished, throwing everything at it.

Other tracks by Jo Meares: The Fields of Yesterday
%