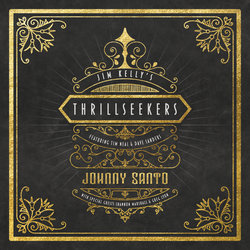 Since moving to Lismore in 1990 to become Head of Guitar Studies at SCU, Jim has released 11 cd's as band leader, the most recent of which – JOHNNY SANTO - is a contemporary Hammond organ trio recording with Melbourne Hammond Guru TIM NEAL and drummer extraordinaire DAVE SANDERS. This CD is definitely not the traditional Hammond trio. It will be launched at the prestigious WANGARATTA JAZZ FESTIVAL this coming November.


Jim has now resigned from full-time academia and is concentrating on his TONE RANGER STUDIO from which he has produced many fine albums.


Johnny Santo was instigated by my love of the tune Sleepwalk by Santo and Johnny. I can't believe how far away from that track this tune is now but it's brought a few women to tears! All guitars - me, Tim Neal - Hammond B4 and Dave Sanders - drums.