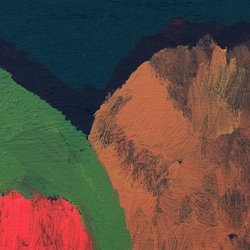 'Universe' and previously released single 'Better/Bitter' perfectly encapsulate Jess' ability to match dreamy guitar pop with a lyricism cut with stark commentary. It's a sound of unabashed candidness that has developed through the long time Jess has performed in unconventional spaces: water parks, cemeteries, roundabouts, bookshops and back porches. So too has new album Universe become a summation of years of writing: "I feel like all of my recordings have been me trying to catch up with myself...document my songs so I can start fresh and write new ones. But I never seem to fully catch up."

Nonetheless, Universe represents for Jess Locke a step forward, and it's our turn to meet her there. With a few years playing and then recording with her full band under her belt, Universe emerged consisting of both brand new and older previously released home-recordings, now re-written. It was a process that pushed Jess musically further than her previous releases: "the album was very much about exploring the sound of things, and capturing an atmosphere, more than any particular concepts. There are definitely themes that pop up, but really, the ideas are quite broad, maybe that's why I decided to call it 'Universe'..."


"The song is about trying to connect with reality," says Jess, "with the physical environment and with people, literally and emotionally..."

The accompanying video, made by Jess' friends, Marnie Vaughn (Bare Pictures) and Mim Montgomery (Monster House), touches on connection and separation, whilst also being colourful and kind of upbeat.