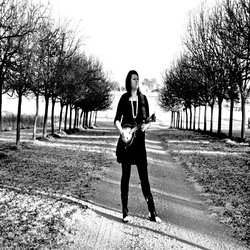 Singer/songwriter/multi-instrumentalist Jess Holland has been honing her musical skills since the age of three. And with her grandfather a founding member of well-known bush group, The Stringybark Band, it’s no surprise that Jess feels a resonance with country music.

In 2011, not long after embarking on a solo country career, Jess was chosen as a Top 20 finalist for the Toyota Star Maker. And in her television debut, she performed at the wedding for Scott Warby on Channel 9’s 'Farmer Wants a Wife'.

Jess was also accepted into, and graduated from, the 2011 CMAA Country Music College in Tamworth.

2011 also saw Jess crowned Voice of Urban Country at the Urban Country Music Festival in Caboolture, QLD. This award allowed Jess to record her debut album, 'Introducing Jess Holland' and to create a video clip for the first single, 'My Kinda Town'.

‘Introducing Jess Holland’ features ten self-penned tracks including ‘Iddy Biddy Pride’, 'Hell & Back’ and 'Where I'm From'. If this album is anything to go by, country music is definitely where Jess has found her niche.

Other tracks by Jess Holland: My Kinda Town
%