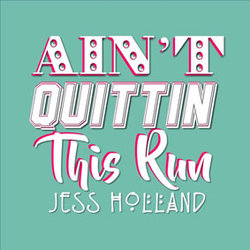 Jess Holland smashed onto the scene with a ‘voice that could peel the paint of walls’ in 2011. As the Voice of Urban Country winner (from the Urban Country Music Festival), and a finalised in the 2011 Toyota Star Maker Competition, she made industry heavy-weights sit up and listen.

Since her debut release, Jess has not only been a finalist in the Toyota Star Maker Competition twice more, but has also been added to the bill of some of the country’s most popular festivals. Her second album release, Whole Lot To Say (2014), further demonstrated Jess’ nuance as a musician and that she was here to stay.


Ain’t Quittin This Run embodies that spirit of finding your own path and sticking to it. I was always told that I should look and sound a certain way. Instead, I went out on a limb to make the music I wanted to make – and I wasn’t quitting!