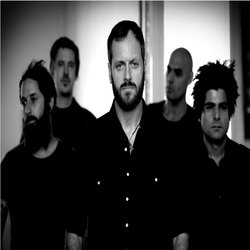 From the gumption of the juggernaut that was their debut self titled EP, it was clear that Melbourne based alternative rock outfit ‘Jericco’ possessed a sound that embodies both ancient and eclectic origins, all the time being modern and relentless in its outlook.

Sabawi joined the band on the back of his success with chart toping heavyweights ‘Superheist’.

‘Jericco’ has shared the stage with well established luminaries such as Dead Letter Circus, Karnivool, Closure in Moscow and The Getaway Plan, as well as headlining numerous sold out shows across this wide brown land.

Great response to the release of the single ‘Monsters’ in late 2011 (after 2 critically acclaimed independent EP’s and Live Album) has opened many ears to the barrage awaiting in 2012. Produced by the keen senses of Forrester Savell (Karnivool, The Butterfly Effect, Birds of Tokyo, Dead Letter Circus).


Cigarettes and Conversations is an uplifting track with a huge chorus, twists and turns, at times invoking classic Incubus, but always rocking!

Other tracks by Jericco: Dance Like No Ones Watching
%