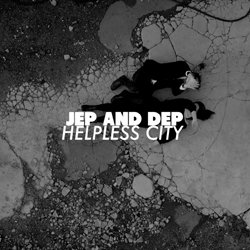 ‘THEY’VEBEENCALLED’ is Jep and Dep’s brand new second album. Stretching itself across the aural equivalent a of lonely midnight drone spiriting across regrets and distant memories ‘THEY’VEBEENCALLED’ is the sound of Jep and Dep refining their folk noir sound into something menacingly beautifully and unique.
Subject matter ranging from the utter disapproval of gentrification, missing rich kids in reservoirs, tumultuous relationships ending with euphoric sadness, the passing of loved ones ... ‘THEY’VEBEENCALLED’ is dark, romantic, real and seeps into the room like a familiar haunting ghost.
Recorded and produced by Darren Cross (Dep) mainly between the hours of 12am- 5am (when all in the neighborhood were sleeping and the gentrification rests for the day) the somewhat heavy noir feel vibrates through the recordings in many ambient and ethereal forms.\u2028After recently supporting LOW, Aldous Harding, Cash Savage, Jen Cloher, Courtney Barnett, Mirel Wagner, Jessica Pratt , Johnny Marr and the Blackeyed Susans - Jep and Dep are ready!
Proudly released and distributed on the duo’s very own label independent record label NO DRUMS RECORDS. the album will be available on Vinyl, Compact Disc and digitally exclusively on Bandcamp- no other streaming services.
Jep and Dep will be touring nationally in August.


Helpless City is taken from Jep and Dep's up and coming second album 'THEY'VEBEENCALLED'.
The song is a bitter but subtle reflection of the all encompassing gentrification of the Sydney's Innerwest.