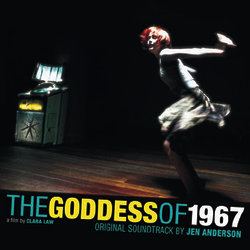 Jen Anderson is an accomplished producer and performer. Aside from her filmwork Jen produced albums for Ruby Hunter, Tim Rogers of You Am I and The Waifs, along with four CD’s of her own work. As a live performer and recording artist Jen plays not only violin, but also viola, cello, mandolin guitar and keyboards. Her years performing live have taken her all over the world with many of Australia’s best known acts including The Black Sorrows (89-93),
Weddings Parties Anything (93-98) Paul Kelly, Tim Rogers (You Am I), Tiddas and Archie Roach.

THE GODDESS OF 1967 soundtrack CD is a stirring, atmospheric collection original of works from the film.

THE GODDESS OF 1967 soundtrack CD is a stirring, atmospheric collection original of works from the film. Composed by Jen Anderson.