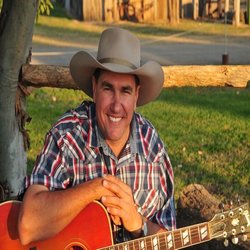 Jeff Brown grew up in a family home filled with the music of Buddy Williams, Slim Dusty and Rick and Thel. His love for the Australian Bush Ballad developed at an early age.

He has been involved with the Country Music Industry since he was 18, releasing seven albums to date and winning two Golden Guitars for Bush Ballad of the Year in 2005 and 2014 at the Tamworth Country music Festival. Jeff is honoured to have recorded his last three albums with Stuie French at Swingin Doors Studios in Sydney.

When not singing and touring, Jeff is a truck driver and helps on the family farm. He genuinely relates to the songs he sings and delivers them with confidence and sincerity.


'After January Rains' was a poem penned by the unique writing team, Kelly and Marion Dixon with Jeff Brown adding his melody. The story is told through the eyes of a retired drover now living in the confines of the city, reminiscing his days moving the big mobs out west.