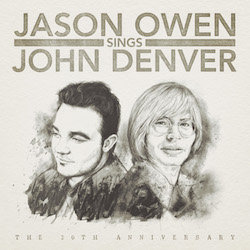 Since the John Denver classic Annie’s Song launched him as a contestant on the X Factor in 2012, Jason Owen has planned for this album. His pop, the much-loved patriarch of his family asked him again and again to do a tribute album. With his pop’s health on the decline and the 20th anniversary of the legend’s passing, Jason knew there was no better time for Jason Owen Sings John Denver: the 20th Anniversary.

The album was produced by Bry Jones with special guest, Chelsea Basham, providing stunning backing vocals. It’s packed with songs that made John Denver a household name including Annie’s Song, Calypso, and first single Take Me Home Country Roads. “I’ve put my own touch on each track but kept true to the uniqueness of John’s creativity,” Jason says.

Born and bred in the small town of Albert 150km west of Dubbo, Jason was raised to the tune of classic country artists. After being launched into the Australian music scene as runner up of X Factor in 2012, Jason has continued to grow into a genuine country artist.

Other tracks by Jason Owen: Calypso
%