Jasmine Atkins - Where I've Never Been 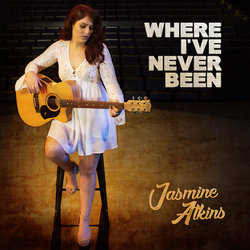 Jasmine started performing at the age of 3, teaching herself to read music and was even writing songs by 8. Graduating from the Academy of Country Music in 2015, she was hungry for success. In February 2015, Jasmine was awarded the WA Country Music Award for Songwriter of the Year. She also won the 2016 CCMA National Talent Quest and competed in the Trans-Tasman Entertainer of the Year Competition, taking home the Most Promising Artist title.

2017 saw her with three WA Country Music Award nominations, and debut video clip Sun Will Come Out Again, finishing the year off co-writing with Kirsty Lee Akers, Matt Scullion, Troy Kemp, and Kristy James and began 2018 with the launch of her event Storytellers at Tamworth CMF. Last year also saw the release of her single, Get Gone.


Moving to NSW recently to follow her musical aspirations, Where I've Never Been is the first step of many for Jasmine in reaching her goals. Co-written with Troy Kemp and Jeremy Barnes, the song focuses on the idea of never giving up on what you want to achieve.