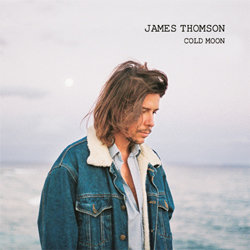 In 2012, James released his debut, self-titled album to glowing reviews from publications like The Sydney Morning Herald, The Age, Stack, Rhythms Magazine and more. They unanimously commended Thomson’s song writing skill as that of a troubadour beyond his years.

Clearly inspired by artists like Townes Van Zandt, Sun Kill Moon and Neil Young, James caught the attention of the Americana community in both Australia and America, and was soon sharing stages with the likes of Mark Olson (The Jayhawks), Simone Felice (The Felice Brothers), Robert Ellis, Jonny Fritz and more.

The captivating sense of restlessness in Thomson’s song writing is organic; spending much of his childhood shuffling between Sydney’s Northern Beaches and rural towns of the Central West and Hunter Valley.


A stark, picked banjo and the eerie hum of harmonium are driven by the stunning slide guitar of Hank Green and an even thump of Double Bass. The air of restlessness and isolation is further echoed in the lyrics. Australian Chanteuse De’May lends sublime backing vocals to the track.