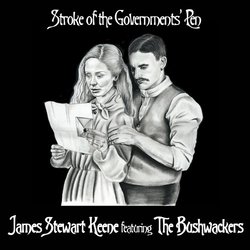 Wollongong singer/songwriter JAMES STEWART KEENE released his second studio album Charm Offensive in March 2017 to rave reviews and chart success. The album hit the ARIA Australian Country Artist Top 20 charts in its first week on sale. To add to it all, every single released off the album to date has charted on the Australia Country Tracks Top 40 airplay chart – an achievement that is quite remarkable.

James attributes the success of the album to a change of approach. Embarking on an album is no easy task for any artist. In this case it was a three year sojourn of gaining management, songwriting, honing his live show, building his profile and finding the right producers to work with. But all in all for James, having the right songs was king.

James has come along way since picking up his Christmas-gifted guitar at 8 years old and lessons from The Four Kinsmen guitarist Graham Wilson. To cutting his teeth playing Eagles and Neil Young songs around Wollongong as a teenager and learning how to write his own tunes and recording his own album. He's played festivals from Tamworth to Airlie Beach and supported The Choirboys and The Radiators.


JAMES STEWART KEENE returns with a collaboration with Australian music legends THE BUSHWACKERS.

Stroke of the Governments’ Pen is the first song written for James’ SHERBROOKE DOWN project, a period feature drama film about two intertwining Australian stories set in rural Australia, 1903.

Co-written with ALLAN CASWELL, the track is inspired by the true story of James’ great, great grandparents.