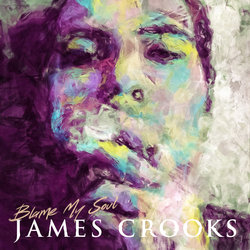 Forthcoming EP 'Blame My Soul' was produced by Crooks in various studios throughout Melbourne, Sydney and his hometown of Newcastle. Its six tracks feature an eclectic mix of revered vocalists, with performances from Tyne-James Organ, Paige IV, BOI, Sam Phay, Coast & Ocean and Dives.

‘LaLaLa’ follows previous single ‘Move On (feat. Coast & Ocean)’, a track that represented a fresh start for James Crooks, despite being no newcomer to the scene. After signing with Liberation Records, he released two tracks, one of which now features on the EP; ‘Naturally (feat. Paige IV)’ (a.k.a. Sarah Aarons, who recently sung on smash hits from The Rubens and Peking Duk), followed by ‘Not Going Away (feat. Kate Martin), which received strong playlist support on Spotify and Apple Music. Crooks also co-wrote, produced and featured on ‘Be Like You (feat. ASTA)’ with Esoterik and ASTA, as well as flexing his creativity on a handful of remixes.

James Crooks boasts co-writes with the likes of Rüfüs Du Sol and Thelma Plum, and has toured with and supported Glass Animals, HEALTH, SAFIA and Chance Waters, just to name a few.


Featuring the vocals of Sydney dreamboat Dives, ‘LaLaLa’ is the perfect addition to your summer road-trip playlist. Crooks’ production plays with layers of percussion and tropical synths to create a glistening, feel-good track. Lyrically, the song is about something you know you shouldn’t do, doing it anyway and focussing only the positives.