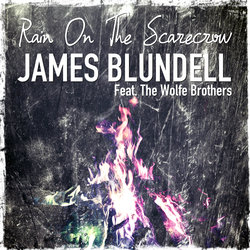 There are many terms people use when describing James Blundell. Icon. Legend. Controversial. Rebel. The truth is James Blundell is all of these things. He is unashamedly honest and comfortable in his own skin. He radiates an enthusiasm for everything that life has to offer and it’s this authenticity that makes him one of the most instantly likable and recognisable artists in Australian music.

James was the first young Australian country act to sign a major record label deal in Nashville, which has since paved the way for the likes of Keith Urban, Catherine Britt and Kasey Chambers. In addition to his own success he has penned hits for Lee Kernaghan, Slim Dusty and Jimmy Little. He is also the recipient of numerous CMAA Awards, double platinum, platinum and gold sales awards and is a five-time ARIA Award nominee with one win to his name.


'Rain On The Scarecrow' is the second single lifted from James' album Campfire. Originally recorded by John Cougar Mellencamp in the eighties, the track features the popular, The Wolfe Brothers. The concept of Campfire is unearthing songs with great stories and telling them the way you would around a campfire.