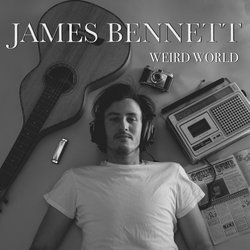 James Bennett is an Alternative Roots/ Folk artist from Newcastle NSW. No stranger to playing live, he plays over 100 shows per year.


Weird World is an upbeat acoustic track. It's a catchy song that will suit different moods & age demographics!
Partly recorded in NZ with drummer 'Michael Barker' who's played in The John Butler Trio & finished back home in Australia! This song is quirky, fun, sure to pick you up in the morning & bounce you all through your day!