Jake Jackson - I Will March For You 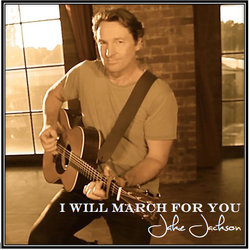 Jake returned to Melbourne after a while and, with no formal education but with plenty of life experience, was accepted into the Conservatorium of Music to study guitar and voice. Jake combined his studies with gig after gig to earn his guitar stripes. Any time left over was devoted to honing his songwriting skills.

Eventually Jake was in a position to devote himself to music again and in 2011 he hit the recording studio with a bunch of songs, written over the decades, and set about turning them into his debut album, 'Hired Hand'.

Jake Jackson is fast earning a reputation for his incredibly personal songs. He is not afraid to dig deep within himself and share that with music fans. He is currently recording an EP, due for release later in 2015.


After marching in last year’s Anzac Day parade, Jake started writing 'I Will March For You'. “This song is my anthem to the fallen, to all those who have sacrificed and to all those that have served their country in the pursuit of the preservation of freedom,” he says.