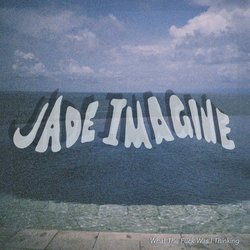 Jade McInally, Jade Imagine’ s front babe and brains, has been a stalwart of the indie scene since circa 2004. After wending her way to Melbourne from somewhere consistently sunny, McInally cut her band teeth with her own electro project Tantrums. Since then she’ s fleshed out scene favourites like Jess Cornelius’ Teeth and Tongue and backed the best on bass (you can still catch her onstage with Jess Ribeiro).

With some urging from mates in the know, at the end of 2015 McInally flexed her songwriting muscle, deciding it was time to play ringleader to her own band of musical-mischief makers again. “I’ m a songwriter, and it took me so long to realise that,” McInally says. “I need to be writing, because that’ s how I feel good.

”Picking up a loaner guitar from Dan Kelly, McInally set about writing all of the tunes for Jade Imagine’ s six-track debut EP What the Fuck Was I Thinking. “I think that guitar had some kind of good juju in it,” she reflects. “It’ s got some amazing vibes. I picked it up and it made me feel like I was sitting on a beach somewhere."


You And I is the third single lifted from Jade Imagine's Debut EP 'What The Fuck Was I thinking' to be released on Milk! Records on Friday 28th of April 2017.